* In case of any delay in receiving the OTP, you may verify it later. Please proceed without verification.

Enter your City name or Pincode

Cheraman Juma Masjid was constructed in 629 AD and it is one of the first mosques to be built in India. This religious spot is located in Methala which is approximately at a distance of 2 km from Kodungalloor town in Kerala. The architecture of the mosque looks similar to a temple and here people of all religions are allowed to pay their respects. Vidhyarambham, the Hindu ceremony which is done before children begin their education, is also conducted here. 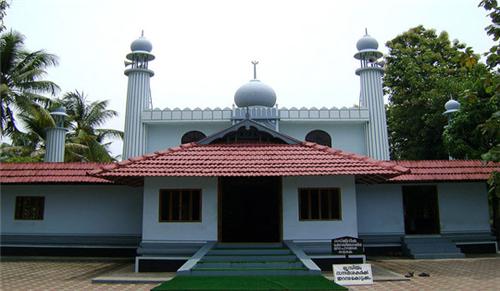 Apart from the fact that it is one of the oldest mosques in India it also stands as the second mosque in the world to introduce the Juma prayers. Another highlight of this place is that it faces east whereas all mosques are built in direction of Mecca. So it is considered to be quite different from all mosques constructed.

The Arab traders came to Malabar region for business purpose and soon began propagating the principles of Islam religion. As per the story the King of Chera made his journey to Mecca and accepted himself into Islam. He changed his name to Thajudeen and soon married the Jeddah king’s sister. On his way back he brought back religious leaders of Islam led by Malik-ibn-Dinar but during the journey he fell ill and passed way. Although, when he was bedridden he prepared a letter introducing the religious leaders. So as promised they were treated with great respect and were given permission to build a mosque at Kodungallur. Arathali temple was reconstructed into the Juma Masjid.

The Juma Masjid has a grand appeal and looks very similar to a Hindu temple. The mosque is a good example of strong bond that exists between the Hindus as well as the Muslims in Kerala. One interesting fact is that this mosque uses a brass oil lamp for lighting and people irrespective of all religions offer oil for special occasions. Various renovations were undertaken here in the 11th century and in 1974 as well as in 1984 further expansions were done. But the Sanctum Sanctorum which comes in the older portion has been left untouched. Inside this mosque there is two tombs one of Bin Dinar and the other of his sister. Here you can spot the Muslim priests lighting the traditional incenses which is another common custom of the Hindus. Every Friday the priest gives a sermon from pulpit which is made of rosewood and it also has certain carvings that look similar to ones seen in temples. A marble block has also been preserved here which was carried from Mecca.

The Aluva railway station would be the closest to access the Cheraman Juma Masjid. It is approximately at a distance of 26 km. Once you exit the railway station you need to head south west on the Aluva-Munnar Road. Make a turn at the roundabout and then take a second exit on to the Masjid Road. Next make a right turn onto the Online IT Shoppe and head left towards the NH 47. Continue on this road and you will pass Hotel Periyar. Make a left turn at the Paravoor Kavala and move onto the Main Road. You can make a left turn at the Municipal office and now you reach Edapally - Panvel Highway. Now you have to make a second left on the on Edapally - Panvel Highway and then continue on this highway. Next make a left turn then two more left turns and you will reach desired destination.